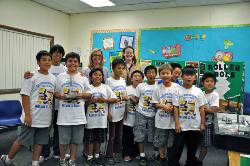 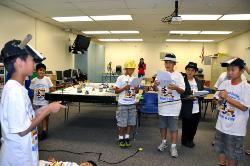 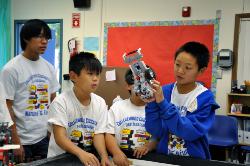 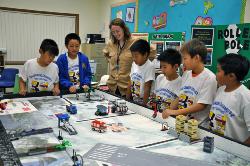 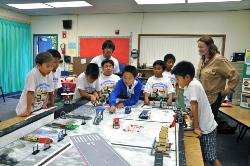 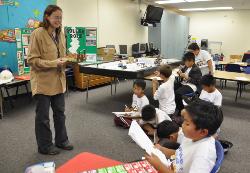 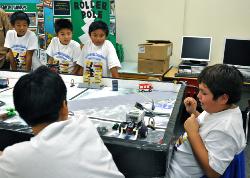 New Robotics Club Launches at Collegewood
NEWS                                                                                    Walnut Valley Unified School District
FOR IMMEDIATE RELEASE                                             880 S. Lemon Avenue
November 18, 2013                                                             Walnut, CA 91789
Contact:
Kelli Gile, Office of Community Resources
[email protected]
(909)595-1261 ext. 31204
First Lego League
New Robotics Club Launches at Collegewood Elementary
WALNUT, CA—During the past several weeks, 30 Collegewood students have been gearing up for a First Lego League competition.
The boys and girls are members of the school’s new after-school robotics league comprised of three teams: two - 4th grade and one - 5th grade.
The young robot experts will vie in the qualifying match at Harvey Mudd College in Claremont on November 23.
“This is such an amazing opportunity for our kids. And the experience is aligned to our implementation of 21st Century Common Core teaching and learning,” said Principal Joan Perez.
Parent volunteers have been helping the 10-member teams prepare for the contest.
“It’s a great way for our kiddos to learn about the real world application of robotics,” said parent Diane Creyaufmiller.
The competition theme this year is Nature’s Fury. Students have been researching natural disasters, causes of the disaster and the consequences. They chose a specific problem and came up with an innovative solution.
“Our team chose earthquakes and the problem they decided on was damage to power poles and power lines caused by earthquakes.  The solution that they came up with was the creation of a rolling power pole, much like the buildings built on rollers, so that the poles would move with the earthquakes, thereby reducing the amount of power line breaks,” Creyaufmiller said.
Walnut High senior Steven Nguyen volunteers as the club’s head coach.
“I have several responsibilities including guiding the kids in the decision making, keeping order so that they do not waste time and helping them find solutions to their problems,” Nguyen said. He also is excited to have a brother who has taken an interest in robotics on one of the teams.
“The kids all work together to accomplish certain tasks in three different areas: Core Values, Project and the Robot,” Nguyen described.
The Core Values are essentially what teaches them to be good teammates as well as show good sportsmanship.
The Robot element is the central part to this activity. The kids program the robot so that it completes as many "missions" as possible within a two and a half minute time frame.
Nguyen said the elementary students have taken charge of the activity requirements.
“The kids built the robot as well as the field elements by themselves,” he explained.
The Project component requires the team to present their topic - earthquakes and power lines - to an expert in the field.
On November 15, Southern California Edison Engineer Lindsey Sayers came to Collegewood and met with one of the teams.
The 4th grade team had a chance to learn more about their topic, ask lots of questions and present their project.
The power poles cost $25,000-$30,000 for wood poles with lower voltage, $200,000-$300,000 for tubular steel poles and about $500,000 for the lattice structure, Sayers said.
“For one?” a Collegewood club member inquired.
The team performed a clever skit to demonstrate their invention.
“We have come up with a wonderful invention, called a roller pole,” they said.
Team members read a script as two boys wearing special power pole hats connected by a cord showed how it performed during a simulated earthquake.
“I like your thinking out-of-the box ideas,” SCE representative Sayers commented.
The team proudly demonstrated their tiny robot and its programmed missions for the competition.
“It’s really exciting seeing the kids working together in finding solutions that can save lives.  I still can’t believe we have the youngest team in the Lego League and how they are competing against 5th- 8th graders!” Creyaufmiller added.
Shown:
The Collegewood First Lego League team skit demonstrated their roller pole concept to visiting Southern California Edison Engineer Lindsey Sayers. The unique power poles are able to withstand an earthquake.
Team members had the opportunity to ask the expert lots of questions during her visit.
Fourth grade students were eager to show their robot with its programmed missions before it competes on November 23.
Collegewood’s First Lego League team, Head Coach Steven Nguyen, Principal Joan Perez and special guest Southern California Edison Engineer Lindsey Sayers on November 15.