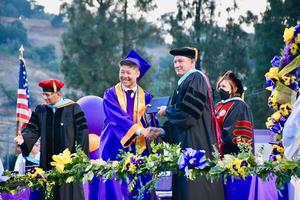 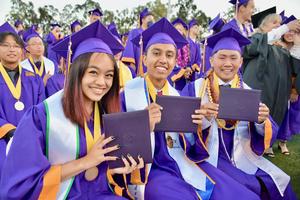 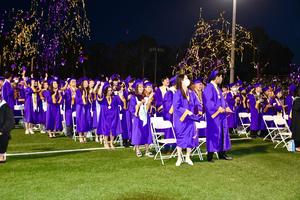 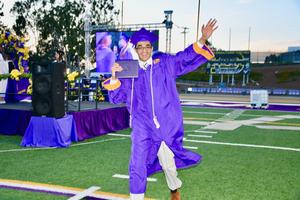 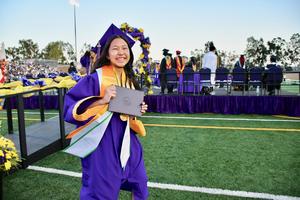 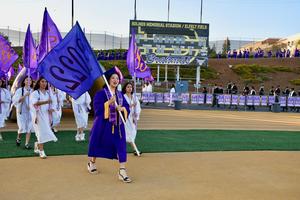 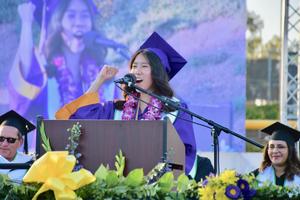 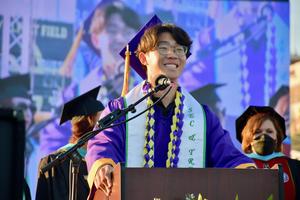 “Without a doubt, so much has changed with ourselves and the world since we first stepped through these gates,” said Class of 2022 President Akash George describing how the class adapted and thrived during the pandemic.

Seniors moved their Friday night hangouts from Boba Time to Discord, pivoted service events from soup kitchens to Zoom, and most importantly gained a deeper appreciation of the importance of human connection and mental health, he said.

“But one thing has remained constant – the fact that we did it all together!”

“I think about how we made it through the world’s most challenging time,” shared Allen Wang during the valedictorian commencement address with Andrew Shi.

“As we move on in the next stage of our lives, let’s remember all that we’ve learned, the resilience that we’ve developed, and the memories we’ve created.”

“And above all, let’s cherish the bonds we formed here at Diamond Bar.”

Graduates assembled on the field in the traditional shape of a diamond, which was especially significant this year, according to Assistant Principal Elizabeth Chang.

“Our diamonds stood against all odds and despite their challenges, they continue to look forward to a bright future!”

USB President Justin Tsai promised fellow classmates “after tonight, we will be turning new pages in our lives with endless possibilities.”

“Make sure you cherish the moments and memories that you made in the past four years, and take time to cherish this moment as well.”

“I plan to make it to the top and know that I’ll see everyone alongside me!”

The ceremony featured the “Pomp and Circumstance” processional by the Thundering Herd band and “National Anthem” performed by senior choir members.

George delivered the closing words of the program.

“Congratulations Brahmas, it’s time to go out there and make a difference!” he said directing classmates to stand and turn their tassels, cueing a spectacular fireworks finale.

At Walnut High School, 541 graduates were recognized during the 52nd commencement ceremony held at the Ken Gunn Stadium.

Diamond Bar High School celebrates Class of 2022 graduates on May 28.