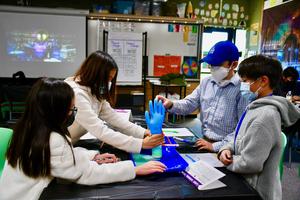 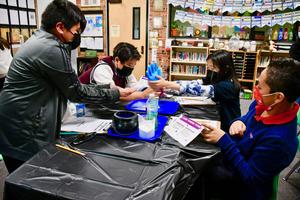 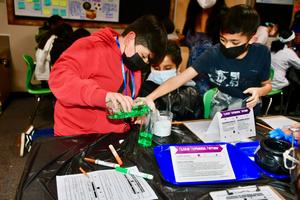 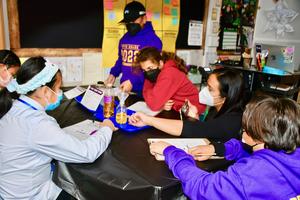 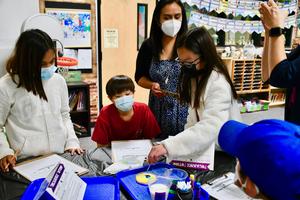 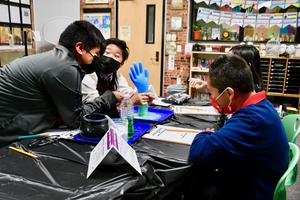 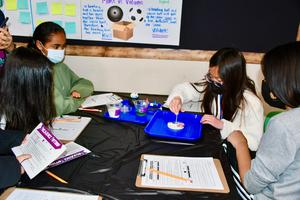 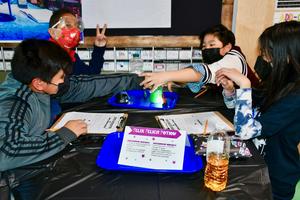 During the innovative Snape’s Potion Lab, student investigators made observations and determined if a physical or chemical changed occurred.

Severus Snape is the name of the Hogwarts Potions professor in the Harry Potter series, explained Harrington, an admitted Potter-expert who even brought in dry-ice cauldron for the activity.

For the Elixer Euphoria Potion, the wizards-in-training placed three tablespoons of Unicorn Horn (baking powder) into a rubber glove and Kraken Venon (vinegar) into a plastic cup.

“Good thing we have a tray!” exclaimed Jacob Abdul Nour as the bright green mixture oozed out from the inflated glove onto the draped lab table.

“It created a gas!” he reported to his teacher who inquired about the reaction.

“It was a chemical change because the signs were bubbles and gas - and it smelled like vinegar chips!” shared Izlet Rodriguez.

The young scientists witnessed a physical change in the Polyjuice Potion Experiment after pouring milk and a drop of food coloring into a Petri dish.

“Then we took a swab and dipped it in the green liquid (dish soap) and it made this cool reaction!” gushed Kenzie Younes.

At the beginning of the year, students told their teacher they felt science was boring.

“Being that they were doing distance learning for so long, I could understand why they felt that way,” Harrington said.

The dedicated teacher was determined to not let them leave her classroom feeling that way.

“We’ve performed so many experiments that I hope I’ve changed their minds!”