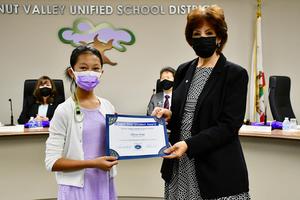 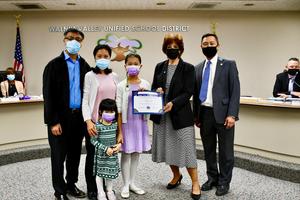 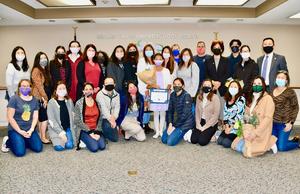 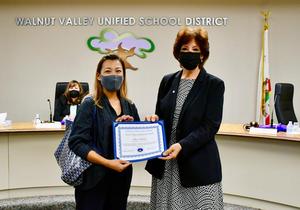 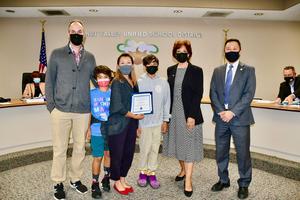 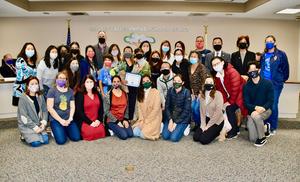 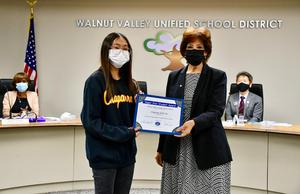 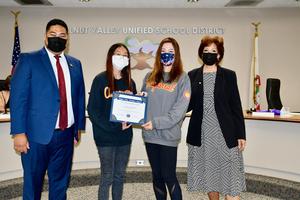 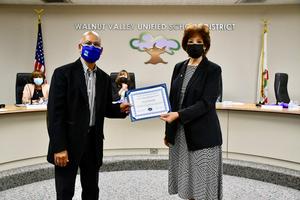 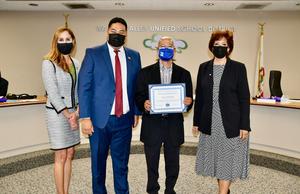 WALNUT, CA—In keeping with tradition, the Walnut Valley USD Board of Trustees recognized exemplary students and parents during the November 17 meeting.

Walnut Elementary fifth grader Alyssa Song was honored with the Super Star Student Award. Alyssa quietly leads by example, encouraging classmates from the sidelines and providing positive reinforcement for a job well done, or even a strong attempt. Alyssa shines in the classroom, but it also takes a very special person to shine through a Zoom screen. And last year, during distance learning, Alyssa did just that. Teachers noticed she was a developing leader with a bright future ahead. Recently, through Student Leadership and Genius Hour, Alyssa has been using her lunchtime break to build leadership skills while working on a community service project for Priceless Pets animal rescue.  She leads by example, is always on time, and ready to contribute.

“Alyssa, thank you for doing your part to change the world for the better!” lauded Principal Robert Chang.

Parent volunteer Alice Zaientz was recognized with the Partner in Education Award. Alice is dedicated, reliable, and so committed that not even a worldwide pandemic could slow her down. She has served as a classroom volunteer and mastered the art of copy machine, paper cutter, and as Friday Folder stuffer. Alice has been a Library Mom and checks books in and out like it’s a game show with a million dollars at stake. Her read-aloud skills are unmatched and have been viewed by hundreds both in person and online. Alice even took it upon herself to get on campus during the Spring and Fall reopening by taking a paid job as a COVID Campus Attendant. She designed the logo, spirit gear, and many banners and posters displayed around campus and was the mastermind behind the drive-through carnival that families are still talking about.

“Alice is the epitome of ‘Kids First’ and Walnut El would not be what it is today without her leadership, friendship, and dedication,” Principal Chang said.

Chaparral Middle School eighth grader Xingtong Bella Bu received the Super Star Student Award. Bella is an impressive student who excels both in the classroom and as a leader on campus. Bella represents her school as a member of the Superintendent’s Student Advisory Council. What sets her apart, though, is her tenacious advocacy for her peers. As the subject of ‘identity and names’ was important to her, Bella promoted having students’ legal name and aliases printed in the upcoming yearbook. Bella also ran for an ASB officer position, and without prompting, offered a rousing, inspirational, and spontaneous speech to peers, imploring them all to be the best supporters and cheerleaders for those who won the election.

“That took some serious maturity, and for that, we are proud to recognize Bella as our Super Star Student!” said Principal Robby Jung.

Chaparral parent volunteer Steven Samaniego was honored with the Partner in Education Award.  “Our Leadership team conferred and said they wished more parents were like Mr. Samaniego during student pick up,” Principal Jung shared.  Steven drives courteously and always waves hello and says ‘thank you.’ But more than being a role model parent in the parking lot (which means a lot!), Steven has poured time and energy into supporting the school’s choir program. When Chaparral pivoted to the outdoor concert model, he was the first to volunteer in whatever way was needed. Choir teacher Greta Davis has expressed her appreciation for all the ways Steven has impacted her program.

“He is a valuable member of our school community, and we often wonder if he ever has a bad day because you wouldn’t know it by his smile and wave!” Principal Jung added.

The WVUSD Board of Trustees honored Walnut Elementary fifth grader Alyssa Song with the Super Star Student Award on Nov. 17.

Chaparral parent volunteer Steven Samaniego was lauded with the Partner in Education Award.