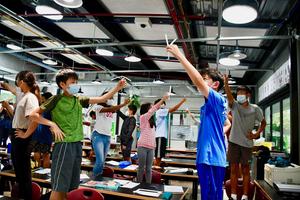 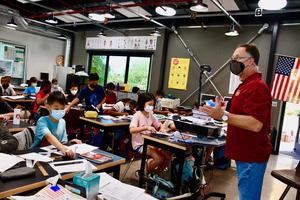 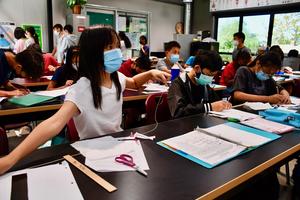 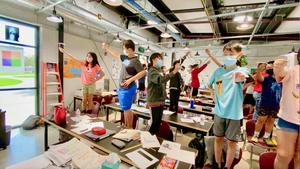 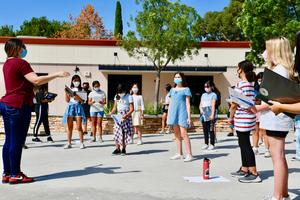 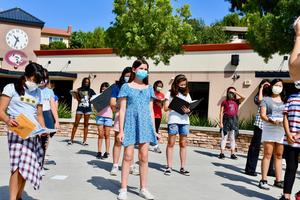 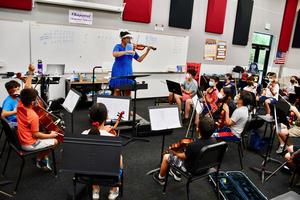 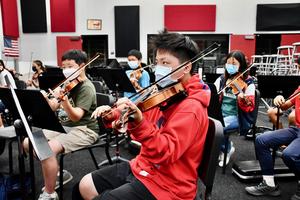 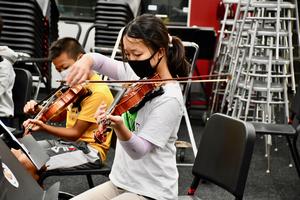 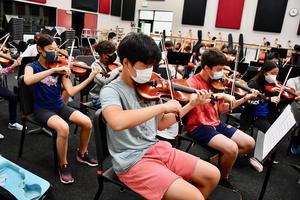 DIAMOND BAR, CA--It was a rare classroom sighting - to say the least.

Thirty-five students were directed to carefully stand on chairs, place hand on hip, with the other arm outstretched high holding a paper helicopter.

At the cue of teacher Mike Miller, the seventh-grade life science class released tiny spinners created from measured strips of notebook paper, and the reaction was immediate.

The young designers quickly exclaimed “Oh!” and “Ah!” while observing several seconds of clockwise twirls to the floor.

After documenting the results, students adjusted the blade angles and climbed back up on their perches for another test run.

During the helicopter drop experiment on Friday, students learned steps of the Scientific Method, made hypothesis statements, and tested their theories during several flights.

They learned that by manipulating the rudders that resembled bunny ears, the helicopters spun in either a clockwise or counterclockwise motion.

In final step, students adjusted their flyer designs by adding pieces of foil, toothpicks, or tape to increase velocity.

“This lab really isn’t really about the physics of flight, but more of a fun way to introduce students to the steps of scientific investigation,” shared Miller, now in his 15th year as an educator.

“The kids love it because they get to challenge themselves to create a better design, use the stopwatch on their phones (a thrill during class), and stand on their chairs - which seems like a no-no!”

Miller’s goal this year is to teach his life science students how to think and express themselves scientifically, critically, and logically.

“I’m hoping my students will learn that science is a balance of fun, discover, and hard work!”

Across the quad, choir teacher Greta Davis rehearsed with her sixth grade Treble Choir for the upcoming October concert.

The masked group took to the outdoor stage while practicing The World in My Dream and What Shall You Do with a Drunken Sailor.

“We are getting used to singing together after a very long break of not making music in the same space and having a lot of fun doing it!”  she shared.

“A large majority of these seventh graders were beginners last year, so their entire musical education has been on Zoom," Barr said.

"Now, they are expected to play as a group, rather than by themselves in their houses, and they are rising to the challenge beautifully!”

The ensemble is on track to present a full concert in November.