Music Plays on During School Closure 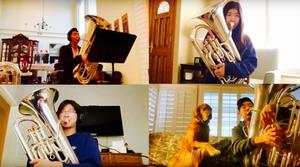 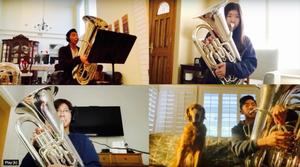 *Check out this 1-minute video clip of adorable golden retriever pawing for attention during: Virtual Concert

The advanced musicians, who were quarantined at home, took to the internet’s world-wide stage during a live virtual concert held Wednesday night.

The teens were able to join online rehearsals before the big 8 p.m. performance with the help of industry professionals that provide assistance to the program that boasts 700 students.

“They are working diligently through these tough times to provide much needed opportunities for the kids to express themselves and stay connected,” said director Steve Acciani.

Then, through the magic of technology, the first group of students began playing with a flute, clarinet, French horn, oboe, and bassoon if they were in the school’s theatre.

A special “furry” guest audience member made an appearance during the finale of the 45-minute concert.

Lu, a sophomore, was joined on the sofa by his trusty golden retriever, Thunder, who was looking for some attention.

In the opening notes, the adorable pet began gently pawing at Lu until he freed a hand from the glistening silver instrument to offer a quick pat on the head.

And then the content companion laid down and appeared to be listening as the talented foursome played the remainder of the song.

“At first. Thunder didn’t enjoy it very much (when I played), but now he’s almost always next to me when I’m practicing,” Lu said.

“The virtual concert was a lot of fun since it was something new - and it kept me busy for the day!”

The complete concert may be viewed on Facebook at: bit.ly/39pC7d1.