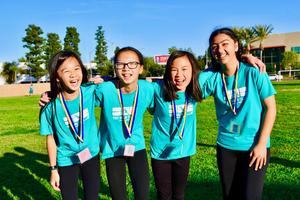 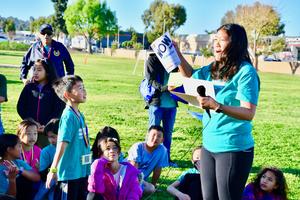 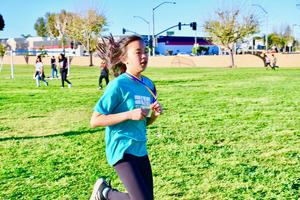 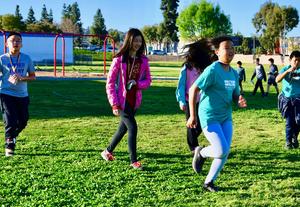 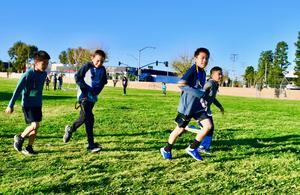 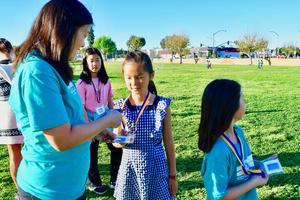 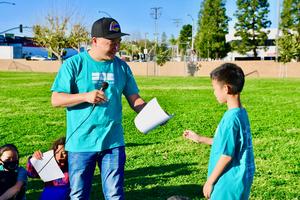 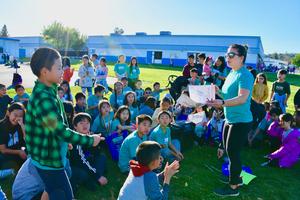 WALNUT, CA—Walnut Elementary students are getting close to the finish line in their quest to run 100 miles during the school year.

The third, fourth, and fifth graders arrive 30 minutes early to school on Wednesday and Friday mornings ready to get moving.

After they lace up their sneakers and stretch, the 100 Mile Club members race around a marked course on the grass from 7:30 – 8:00 a.m.

Over 125 students signed up to participate this year, nearly triple the number since the club began three years ago.

“I joined because I like to run and be active,” said classmate Avery Cruz, age 11, who has reached about 60 miles this year.

“And it’s fun to run with my friends!” said Cruz who was among several members that clocked an additional 3.2 miles by joining a 5K marathon earlier this year.

“As coaches, we want to instill in them the importance of having a healthy body, to mentally persevere, and to have a year-long commitment in reaching their goals,” said fitness proponent Lim, who has completed 25 marathons.

“Stay consistent – slow and steady will get you there,” Lim encourages as runners take seven trips around the course for each mile.

The coaches also keep the energy level pumped up by playing the kids’ favorite songs on a new portable speaker.

“They’ve been braving cold mornings lately, so they are definitely troopers,” Lim said.

Students that reach 25, 50, and 75-mile goals are rewarded monthly with certificates and incentives including t-shirts, water bottles, and backpacks.

At the end of the year, those that complete 100 miles will be presented with a medal during the schoolwide awards ceremony.

Many young athletes are on track for reaching that goal, including third grader Tyler Liu, age 8, who was the first member to hit 75 mile-mark in February.

Liu said he tries to complete 16 laps during each session.

Fifth grader Audrey Leung, age 10, was one of three members honored with Runner of the Month certificates.

Leung, who has finished 48 miles, was singled out for having an “amazing attitude.”

“You get a gold medal”

The 100 Mile Club is a national non-profit organization that challenges students of all fitness levels to participate.

“This club is for everyone,” said Liu who has two children in the club.

Collectively, the Walnut Elementary children have tallied over 3,000 miles this year.

“We show them on a map of the United States so that it’s tangible,” said Dong.

Walnut Elementary third grader Tyler Liu is rewarded for reaching the 75-mile mark by his coach (and mom) Natalie Liu.

Runners of the Month! Coaches present awards during Feb. 27 meeting.