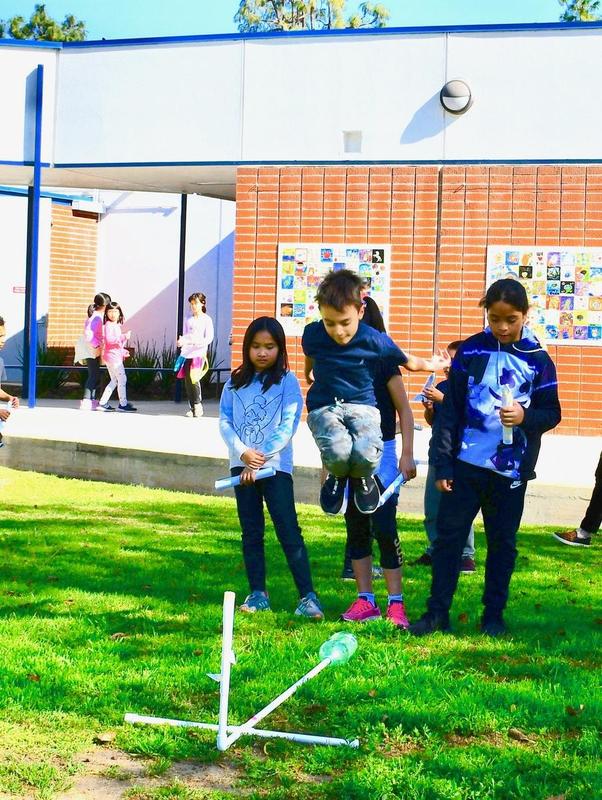 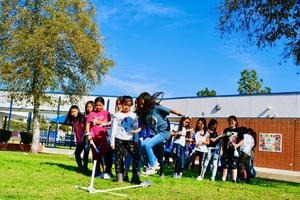 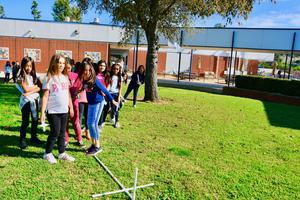 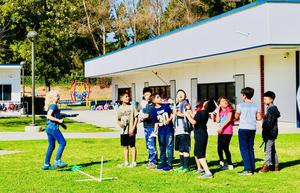 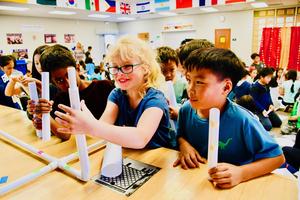 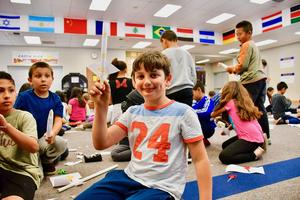 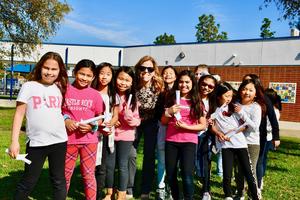 The young inquirers first hypothesized their ideas about flight and design using Newton’s laws of gravity and movement.

“Your job is to decide if there is a relationship between the stomp and how well your rocket flies,” said Principal Jen Alcazar who led the activity.

Then the kids got busy building, testing, and re-building their aerodynamic flyers.

The International Baccalaureate Primary Years Programme (IB-PYP) School strives to create children that are globally-minded and who incorporate IB attitudes and attributes into their daily lives.

“I’m going to make three triangular fins and a cone for the top so there’s as much air pressure as possible,” said Austin Lee, age 9.

“I’m going to cover the top with a triangular nose - that way the force of the air will push against it,” shared Emma Lau.

“If the top was flat, the air would push down on the rocket and it wouldn’t go up.”

“My design is going to tape up everything so if you stomp really lightly none of the air pressure escapes,” said Ian Jones.

In about 30 minutes, the four grade-level classes went outside to test the rockets on launchers made of PVC pipe and 2-liter soda bottles.

One-by-one the fledgling engineers secured the mighty missiles to one end and then stomped the plastic bottle at the other end hoping for lift off.

“Cone and fins are the key,” Alcazar said while watching the flight show.

“And if you have a little mass on the tip it helps keep it stable.”

Some of the high flyers soared 20-feet into the air and one even got stuck in a towering Elder tree.

The quick-thinking school leader took aim and tossed her shoe up into the branches and knocked it free.

“Our job is not to tell students what to think, but to teach them how to do so,” Alcazar said.

“Allowing kids to engage in inquiry lessons like this one allows students to craft hypotheses, test theories, and work in collaborative groups, all necessary skills for success in college, career, and beyond. And if they learn some science in the process, even better!”