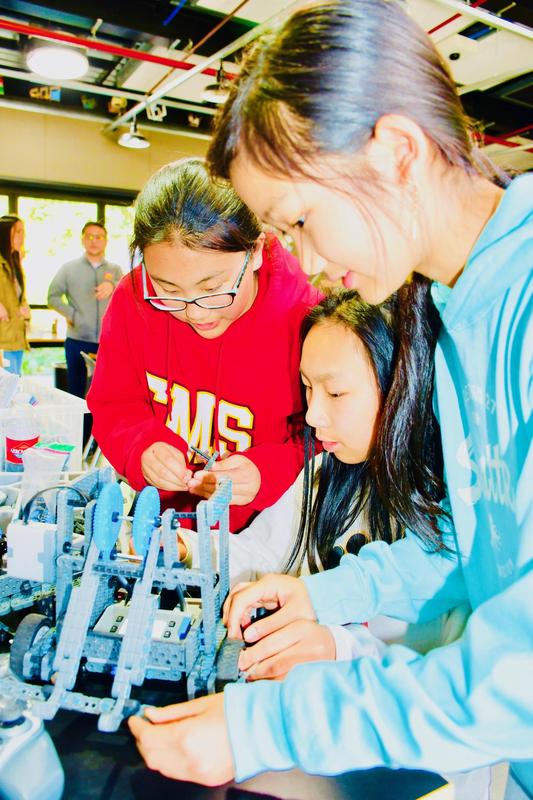 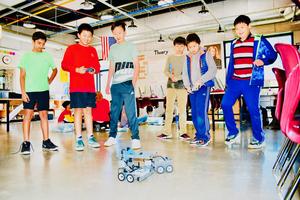 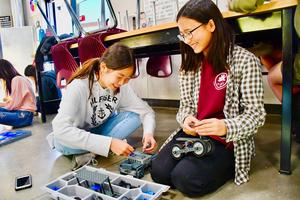 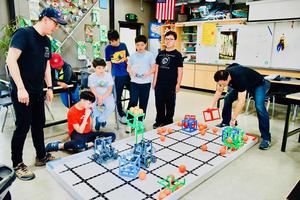 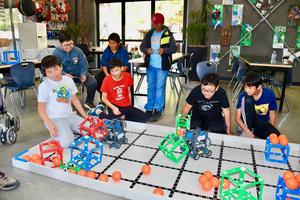 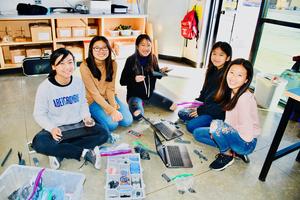 The teams tried to rack up points by programming the little bots to pick up and move cubes to marked side platforms on the course.

“We’re adding a piece at the back because when it picks up the plastic boxes it tilts forward,” explained seventh grader Anastasia Ong, a member of the all-girl competitive team called Spicy Food.

Three rookie groups, with 15 students total, were readying for the regional VEX IQ Challenge in San Diego on February 16.

“It’s a lot of programming and building – this is version five!” Ong shared while making precise adjustments to the robot’s design.

“This will make it more efficient,” added teammate Angel Yu, also a seventh grader, who has been involved in robotics since elementary school.

“I like it because you can do a lot of things – designing, building, coding, and being part of a team.”

“There are so many different areas in robotics that are unique and fun!” chimed 7th grader Kristin Chea.

The members said they are proud to be part of the elite “girls that code” movement.

“I think it’s cool! In my PLTW class, there are only four girls - and I’m one of them!” Chea said.

Now in its second year, the thriving Robotics Club at Chaparral has over 30 members on competitive and recreational teams.

Teachers Emirick Haro and Ivan Macias along with three parent coaches work with the students 60-80 minutes each week.

“This love for robotics is very organic,” said Haro, a science teacher who advises the recreational groups that meet in her Design-Based Learning classroom.

“They solve their own problems, have the grit to figure things out, are resourceful, and collaborate with each other – it’s amazing!” she said.

Two of the recreational teams of boys enthusiastically battled their robots during the February 12 meeting.

“I thought it was pretty cool, so I joined,” said seventh grader Aidan Chen between the challenges.

“The best thing is you get to build things and battle!”

Teammates named sixth grader JJ Pak as one of the best coders in the group.

“I guess I have sort of a knack for it from doing Scratch,” he said.

Students search for online designs or come up with their own original ideas and then program using Chromebooks or cell phones, according to Haro.

Several of the recreation groups were gathered with their VEX IQ kids building and coding new robots during the meeting.

“We all listen to each other,” commented seventh grader Eric Zhang about working on the detailed projects with his team.

“You can see designs you want to do and get the instructions,” shared seventh grader Amanda Chung while coding directly on her phone.

“I can use it for the remote control too!”

“We picked this Stretch-bot design because it has pieces we didn’t use before and we wanted to try it,” Chansaid.

Another group was busy methodically placing tiny pegs in slots to create two new robots - an alligator and free-style catapult.

Seventh grader Nina Wu said she was looking forward to flipping something off the miniature catapult.

“We tested it and it doesn’t go that far right now,” she said.

“I like coding because it’s fun,” said Denisha Huang.

“We did it in the 5th grade and I wanted to do more,” said Drea Wong.

Haro said she is glad the school created a comfortable place for young women to come out and explore engineering and programming.

“In these male dominated fields, it’s nice to see so many girls take risks and find joy in robotics,” she commented.

“There’s definitely space for them, and the world can use their unique perspectives in solving the world’s problems through STEAM!”

The teacher also has plans to host an intermural competition with South Pointe and Suzanne Middle Schools later this year.

“The kids are learning some very valuable lessons while getting to know each other and learning to build and program their robots,” said parent volunteer Mike Yu who works with the competitive teams.

“You have to have the right people around you and then you can do anything!”