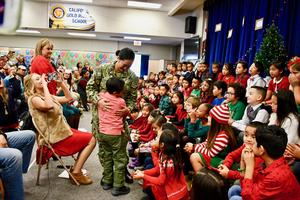 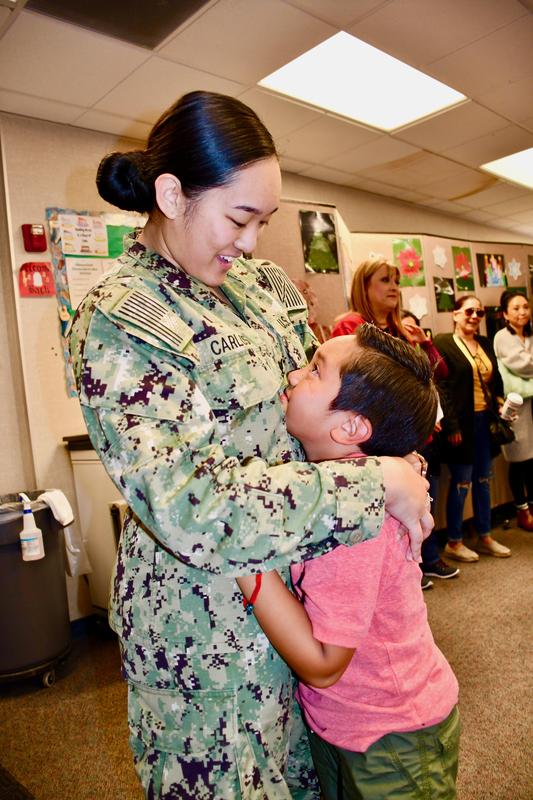 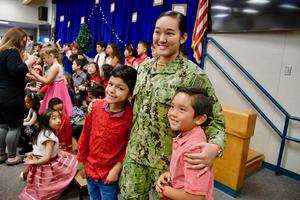 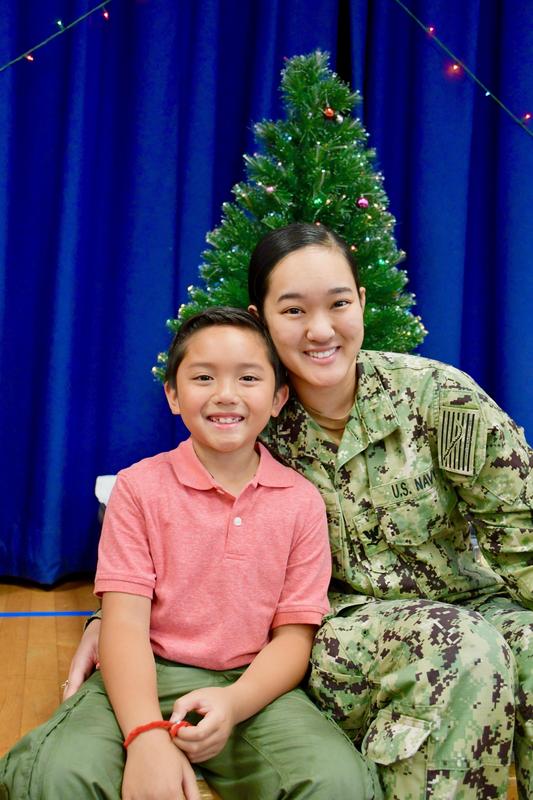 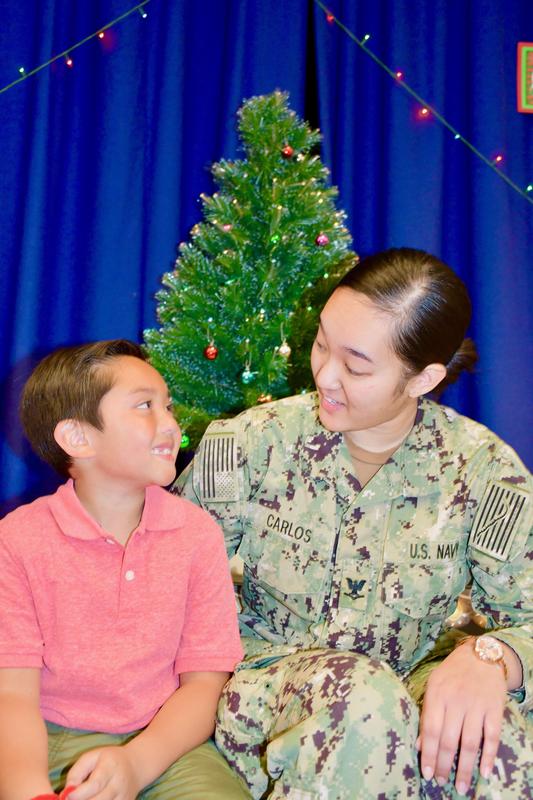 WALNUT, CA—Collegewood Elementary second grader Anton Carlos had no idea that his dream Christmas gift would arrive at school on Friday.

He’d been really missing his beloved sister, Kathryn, a U.S. Navy Petty Officer on a Nuclear Power Training Command in South Carolina for the past two years.

Anton had been wishing that she’d be able to come home for Christmas and time was running out.

In the morning, the seven-year-old performed with schoolmates during the annual Christmas Around the World musical in the multipurpose room.

He could have never imagined that his holiday request would be granted within the hour.

Anton bravely stepped up to the microphone during his part describing a Mexican Christmas party with children breaking a piñata before receiving gifts.

The 80 children from four classes sang and danced the final numbers including Feliz Navidad, Frosty the Snowman, Let There Be Peace on Earth, and We Wish You A Merry Christmas.

“We learned today that people celebrate holidays in all different ways!” said Principal Dr. Mary Wendland at the show’s conclusion.

The children took seats on the stage steps behind her.

“This is the time of year that people think about presents and things, but the we can forget the real importance of this time of year is families and peace,” she said.

Wendland said she’d been thinking a lot about those who are separated because they’ve given up a hero in their family who is defending the peace.

“This time of year can bring us a lot of joy, but when people that we love are away from us, it’s bittersweet.”

Wendland then acknowledged members of the military in attendance as several stood to be applauded.

Anton’s eyes brightened as he tentatively looked around the room.

But, he didn’t see any familiar faces and silently looked back down at his hands.

“We recently learned that one of our second graders, Anton in Ms. Johnson’s class, has had a heavy heart because he has been missing his sister who is serving and protecting our peace,” Wendland said.

Anton looked up and intently met his principal’s eyes as the school leader continued.

“And we have a surprise for you, Anton - your sister has flown in to be here today!”

Then, there she was walking through the door, to the front of the stage, and into his arms.

Anton, who hadn’t seen his oldest sister in a year, gave her the biggest hug as she wiped away his tears.

“I missed her a lot!” he said afterward.

Parents, Sheila and Jun Carlos, proudly watched the emotional reunion of their children with audience members.

The family is thrilled that they will be together for Christmas and for an entire month.

Kathryn, a 2017 Walnut High grad and IB student, is training to be a nuclear operator for aircraft carriers and submarines.

“It’s really cool, not a lot of people can do this,” she said.

“And out of the 80 crew members only two are girls.”

“She was the top of her A Class,” her mom proudly shared.

Earlier she surprised her younger sister, Kirsten, who is a Walnut High senior.

“She had just gotten off work at Chick-fil-A and I was hiding in the front seat!”

What’s she planning to do first?

“Go to In-N-Out and get a Boba!” Kathryn said grinning.